The Flagstaff Hill Golf Club has a proud history...

The suburb of Flagstaff Hill was developed in the mid-1960's by Hooker Rex Pty Ltd who employed a New South Wales Golf Architect, Mr Bob Green, to choose the best site and prepare the Golf Course.  With the guidance of Hooker Rex General Manager, Mr David Hillan, the course began to take shape and was sculpted into a Flagstaff Hill landmark with future housing sub-divisions offering prime golf course frontage.

In 1967 the Golf Club was formed and the Clubhouse built, and Hooker Rex asked the Committee of the day to run the golfing side of the project, giving the Club the right to purchase the property at some time in the future. This option was taken up in 1978 and the Golf Club now owns the land and the first class Clubhouse.

On Monday 28 October 1968, the club hosted an exhibition match including the top three players in the world, Jack Nicklaus, Arnold Palmer,  and Gary Player, and also Bruce Devlin. This was well publicised and attended by over 5000 people. This publicity helped promote the club and attract new members.

Click on the picture below to view a video presentation, which includes original photographs and Super 8 movie recorded at the event (17 mins). 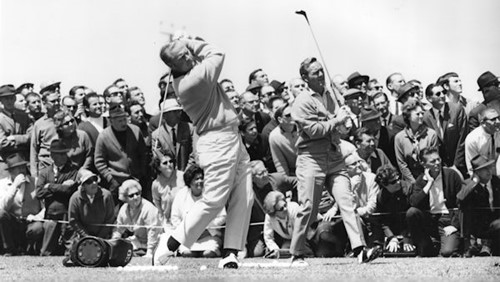 All activities of the Club continued to be developed with one of the most major projects being the construction of the water catchment area. This dam not only provides top class water for maintenance of the course, but is also an integral part of the course and has formed what is the most picturesque par 3, 7th hole, and was appropriately named Loch Hillan in recognition of David's many years of personal input to the Club's development. The photos below at the opening cermony on 31st August 1980 mark a major milestone in the club's development.

David Pank addressing the crowd at the opening of Lock Hillan (in blue 3rd left from microphone).

In 2001, approximately 9 hectares of adjoining land was bought from SA Water. This land, containing spectacular views over the Adelaide Hills, was converted into two challenging golf holes. The addition of these holes allowed the Club to sell 4 hectares of the existing golf course to AV Jennings for a housing development. The finance received from this land not only paid for the new land, the new holes, numerous improvements to the Clubhouse and all the Club debt, but also left a substantial amount for future development and improvements.

Over the past few years, four additional holes have been constructed, one existing hole totally reconstructed and the 17th and 18th holes joined together. This has left the Club with a 19-hole golf course. These additional holes allow the Club to proceed with the plan to reconstruct all of the holes on the course without inconveniencing Members and visitors.

With the help of a Federal Government Grant under the Community Water Grants Scheme, a stormwater harvesting system was installed to increase the club's stormwater catchment capability by at least 30%. This is illustrated in the aerial photograph below, which shows the original catchment area in red, and the new catchment area, which includes the new subdivision arising from the sale of Golf Course land, in yellow.

The water is pumped via a 600 m pipe, 150 mm diameter, at a rate of 40 litres per second discharging to the dam behind the 8th tee.

The large modern Clubhouse underwent a complete interior refurbishment in 2001, providing a modern décor to complement the superb facilities and hospitality options available to members and the public alike. Facilities include a comfortable Members' Lounge and a large Dining Room, all of which can be turned into a large convention or entertainment room.

In 2012 the clubhouse amenities were upgraded to include a disability access bathroom and a renovation of the guest bathrooms on the upper level.  In January the following year a complete refurbishment of the lower level of the building included the locker room facilities for golfers, a new entrance including access ramp and a 8 person lift from the foyer to the upper levels of hospitality services.  The space allocated to lockers was rationalised and the new areas of a seminar room, archives storage room and beverage store were able to be added to the downstairs layout.

Members and the general public are able to take advantage of these facilities, not only on Club social occasions but also for their own private functions, Weddings, Trade Days etc. or for public dining 3 nights per week.

More information can be accessed on the following significant topics: (information will be loaded shortly)

Building of Loch Hillan (the dam)